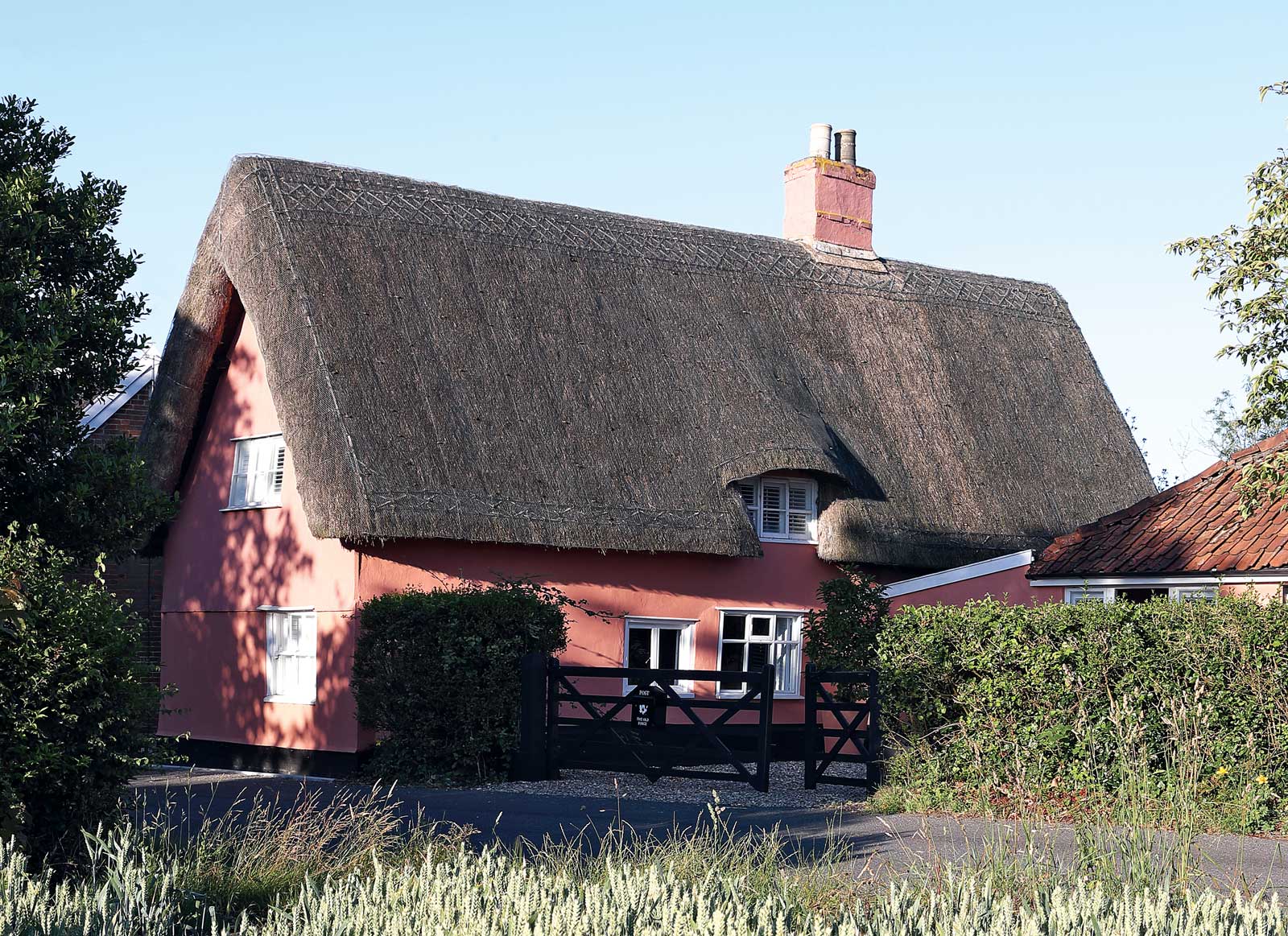 Open the door to Dan Carter’s English country cottage and find hundreds of years  of history celebrated to form a modern weekend retreat.

Nestled in a tiny village in Suffolk, Dan Carter’s pink thatched weekend retreat couldn’t be further from the “minimalistic, white shoebox” he lives in during the week in London’s Notting Hill. But that’s exactly what he was looking for when searching for a weekend bolthole.

“I’d been looking for a holiday home for years. I needed somewhere I could get to in a couple of hours or so, and stay for a couple of days, if that’s all the time I had.” Dan first looked at a regal Georgian house in Diss but discounted it for lack of garden. But, hooked on the area and Diss’s direct connections to London, the search was on for a place with enough space for friends and their kids to run amok. “When I came to view the forge, I walked to the end of the field and looked back at the cottage; it was like a fairy tale house, I just fell in love with it. The thought of the meadow growing and kids running around in it felt quite magical. So the land inadvertently became quite important. On the flipside, the cottage, which is Grade 2 listed, is quite small so I often have people to stay who camp in the meadow and I throw an annual summer party where the whole place becomes like a mini festival.” It took quite a while to get the house festival-ready, however. Whilst, structurally nothing could be changed due to its conservation status, the cottage was a shell. “The previous owners took everything but the kitchen sink…literally. Their kitchen was freestanding so I got here and it had gone. I had to beg them to leave the curtains so I didn’t feel completely exposed in those first few weeks.” Dan set to work as soon as he got the keys, starting with complete rewiring. “You realise how connected everyone is in the countryside; from that one amazing electrician I found everyone I needed to help get the house in order.”

The cottage, of course, needed a new kitchen, utility room and bathroom, but Dan undertook all the painting and cosmetic redecoration himself. “I never laid out a schedule…I just knew I wanted to do as much as possible myself, so it became a sort of hobby. I’d arrive for a long weekend and just get stuck in, doing as much as I could before returning to London. I wanted the place to look formal but comfortable. The flats I’ve renovated in London are whitewashed and minimal, so I knew I wanted the country house to be more colourful. I had a dirty colour palette in mind…pink, blues, greys…any colour as long as it was greyed—off.”

A former textile designer turned serial house-renovator, Dan has instinctively instilled a colour journey throughout the house; the entrance hall, predominantly “dirty” pink, has one end painted deep blue to coax you into the dining room, painted in a “dirty” green. The colour palette was tackled in its totality—how the tones flowed from one space to another—as opposed to being determined by each individual room. “I’d paint in total silence. A room might have 10 beams, and not a straight wall so it was a laborious process, especially as every room needed at least two coats of paint.” Little piles of dust are evidence of a building that continuously moves, so Dan chose Eicó paints, which are acrylic based and offer a certain degree of physical flexibility and were available in his coveted “dirty” palette. “The light is very different in each room with every hour of the day so I knew the house could tolerate colour. Its mood changes as the day progresses and I liked the idea of giving in to the pokiness of the house with its low ceilings and small windows by using dark colours. The thatched part of the house has such thick walls, it’s quite cold. Even on a sunny day you feel chilly when you come in, but I like the fact that it encourages you to snuggle down.”

The house dates back to the 16th century. The thatched part of the house is known as a “hall house”; a floor-to-ceiling building with 1 or 2 platform levels where the forge owner and his family would have slept. At ground level there would have been a fire, with the animals living under each platform. The living room is where the forge would have been and was originally separate to the house, although at some point an addition (housing the utility, bathroom and entrance hall) was made to connect one to the other.

When it came to dressing the house, Dan had a complete lack of snobbery. An Eames Lounge Chair, arguably one of the most iconic design classics, will sit quite happily next to a pot he picked up in a local supermarket or a vase from a junk shop; the principle being that the curated collection is much more interesting than any individual piece. “I don’t ever buy something to go with another thing. If I like it, I buy it. Pretty much everything was bought specifically for this house but it was, and is, an ongoing process—I find things wherever I go and they always seem to fit.” Dan is the common thread within this home—from the ornaments he picks to the fabrics he’s drawn to—his taste is the inbuilt theme. If half the ornaments were relocated from one place to another they’d settle quite comfortably in their new surroundings.

Suffolk is big-sky country and a place where you can see the weather arriving and leaving. It is one of the driest counties in the UK, with many weather fronts seemingly passing the whole of East Anglia by. Dan enjoys all the seasons here and feels much more in tune with nature, the weather and the seasons in a way he never fully engages with, or anticipates, in the city. Summer and its huge expanses of blue punctuated by giant puffy clouds, meaning days are spent almost entirely outside, are a favourite. But autumn’s rolling mists over the fields and snuggly winter evenings hunkering down with a glass of red are as loved by the Old Forge’s owner, before spring arrives and everything “starts waking up” in his beloved garden.

“The village hosts Open Gardens every two years to raise money for the church and local charities. I’ve taken part since I moved in and it’s become a really great way to get to know our neighbours, which is something that DFLs [Down From Londons] aren’t often so great at.” The garden has evolved since Dan’s been here, designing itself around a driveway that was already there and trees or shrubs that Dan wanted to keep. A decked area replaced an overgrown rockery, mimicking the existing shape and layout but reinterpreting it using more modern, design-led materials, which, in turn, further emphasize the contrast between old and new, something that has become the trademark of this property. “I do love cottage gardens but framing this one with the slate chippings and the grey painted wood has provided sharper lines, which are a great contrast. I wanted a garden that was pretty low maintenance so it could survive well enough when I’m not here but had enough to keep me busy when I am.”

Whilst many shy away from second homes, daunted by the amount of work they might generate when the owner is supposedly going to the countryside for downtime, this is not the case for Dan, “I hadn’t renovated a property for three years, so I needed a project. I’m a terrible potterer, I just can’t keep still. I love doing the jobs that nobody ever sees or notices have been done. Now most of the big jobs are out of the way, those small tidbits will get more attention and I couldn’t be happier about it. Although if it ever needs repainting, I’ll outsource that—my shoulder is wrecked!” 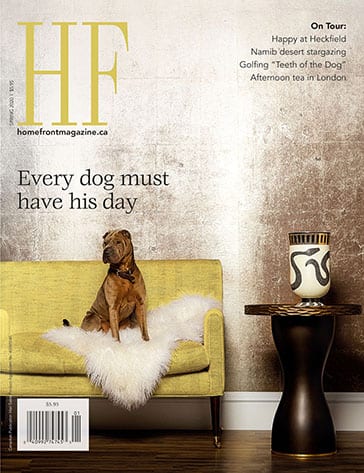 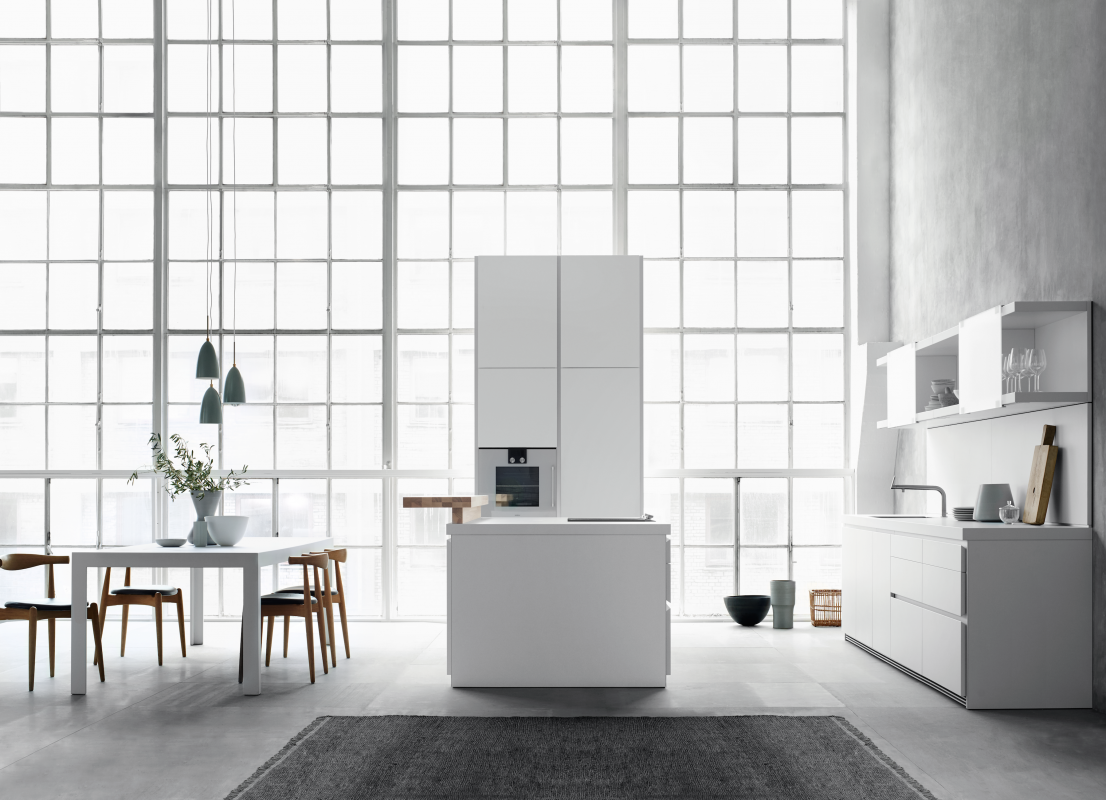 With busy times ahead, Bella Cucina is going multi-purpose. With wellness and healing arts practices that inspire “The simplicity of self,” Shou Sugi Ban House, in the Hamptons, is a unique gated thirteen-studio spa and wellness retreat. 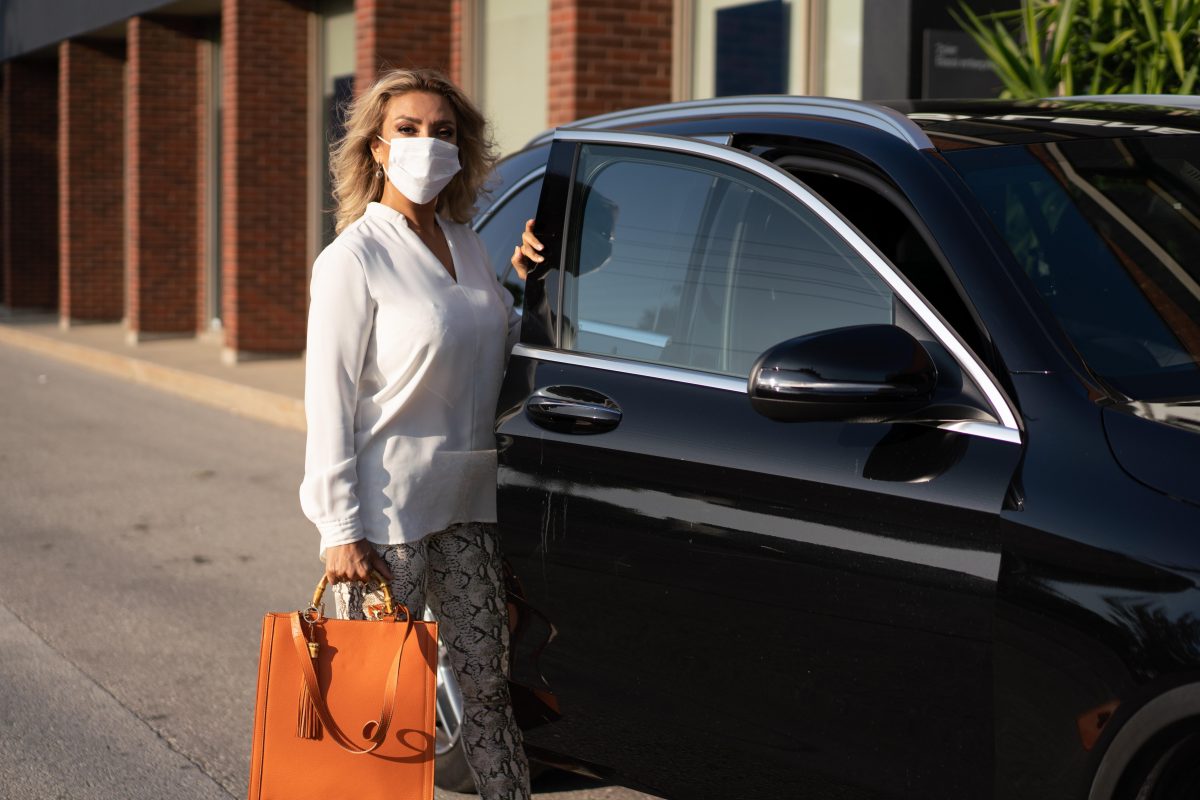 Not all masks are created equal #MaskUp

Wearing a face mask has become a critical part of Canada’s campaign to prevent the spread of Covid-19 and protecting yourself from infection. Buy Canadian and #MaskUp! 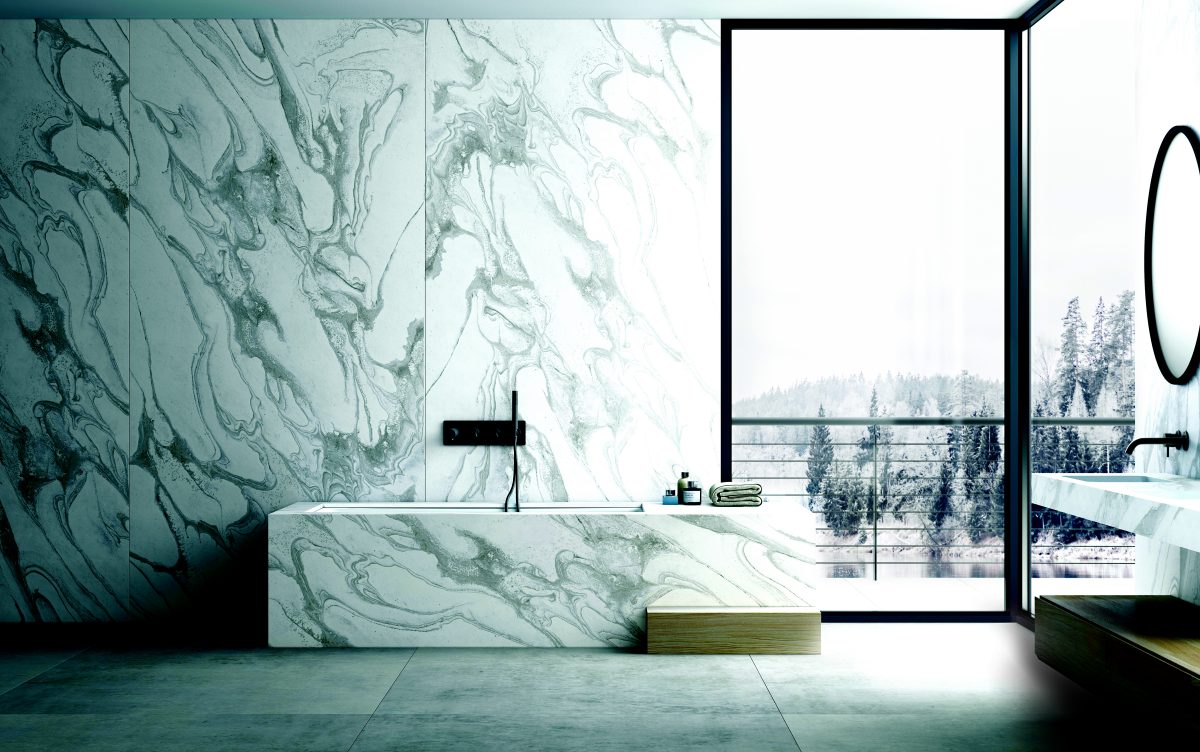 This fall, it’s a black and white affair. Be the colour in a black and white world

By Edilka Anderson
The décor choices we make when designing our homes are often innately linked to our personalities. 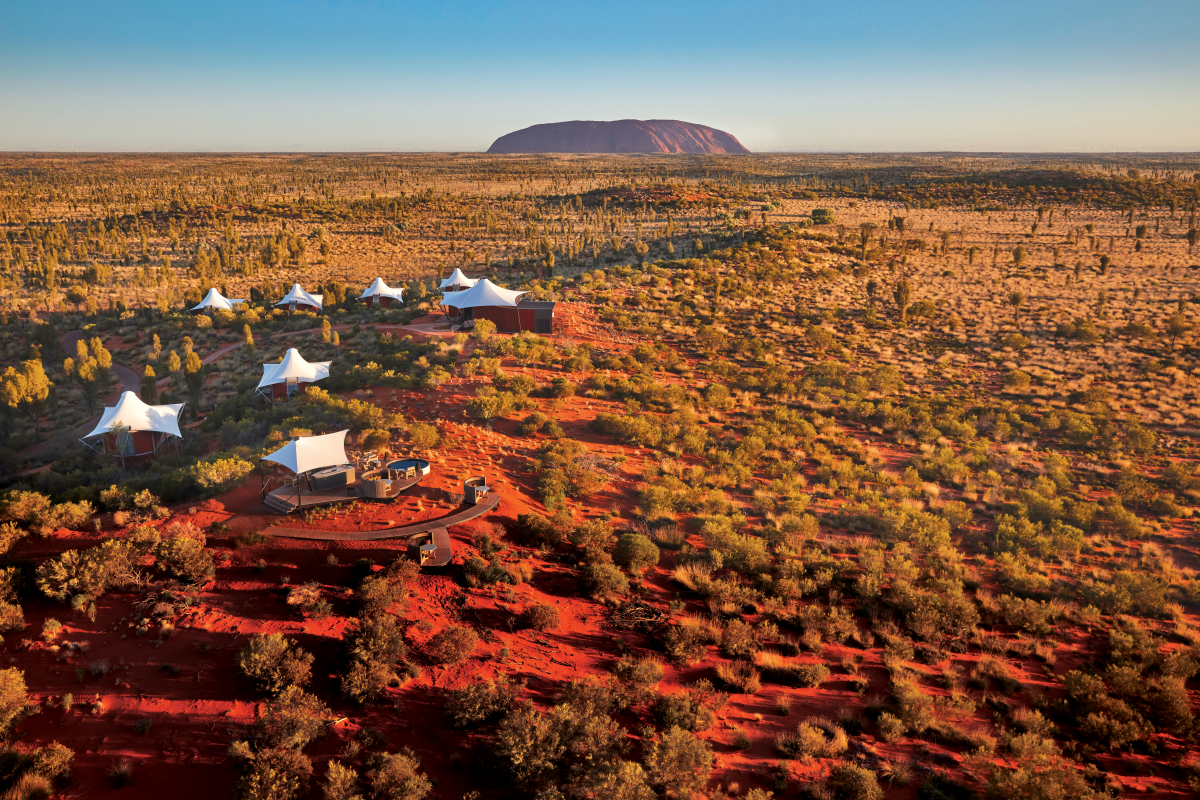 Doing the Harry to get to Longitude 131°

On its own secluded 30,000-year-old sand dune with Uluru in its sightlines, Longitude 131° is truly a one-of-a-kind destination.