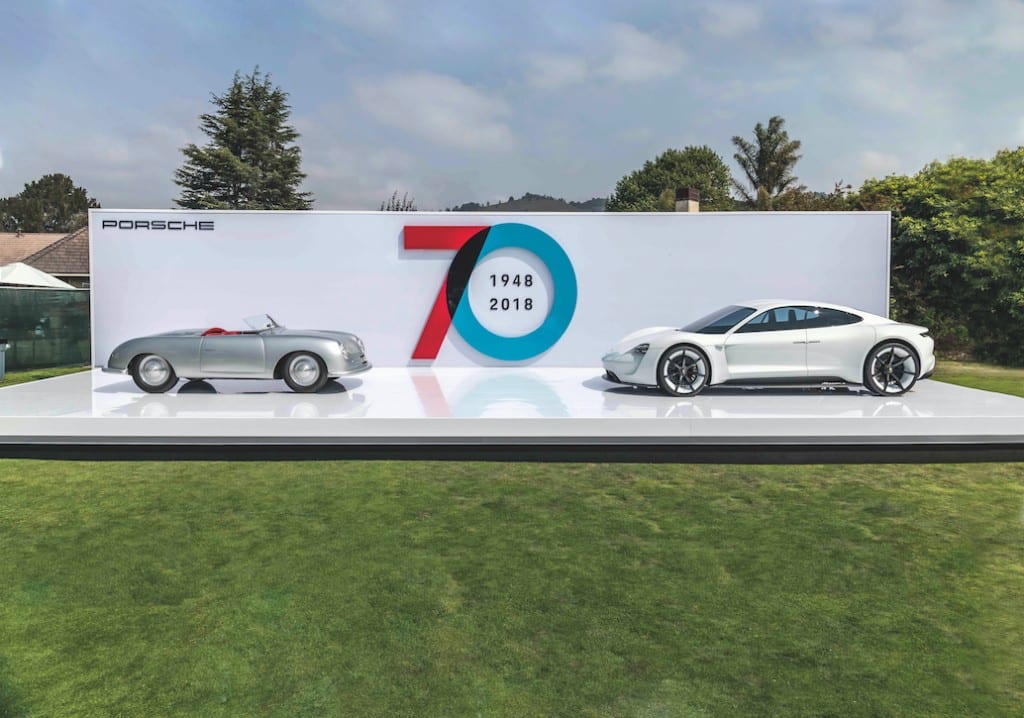 Porsche turns 70 in style at the Concours d’Elegance

Like fine wine, the iconic Porsche brand has aged well, steadily improving its already enviable image on both the roads and racetracks of the world.

In celebration of the formidable brand’s 70th anniversary, I was invited to the annual Monterey Car Week on the Monterey Peninsula—North America’s leading gathering of the automotive passionate. This pre-eminent industry occasion, which runs for just nine days every August, transforms the region into a playground for car connoisseurs, rich and famous vintage collectors, and the who’s who of the automotive world.

Classic-car aficionados flock to Monterey County on the Pacific Coast of California from all over North America, Europe and other parts of the world to attend this one-of-a-kind, annual event. Many arrive with their treasured classics and handlers to throw their hat in the ring for a “Best in Class” win or, ultimately, “Best in Show” honours.

Started in 1950, the Pebble Beach Concours d’Elegance is considered the most prestigious automotive event in North America, drawing enthusiasts and collectors of vintage automobiles from

around the world. Held as a charity fundraiser and hosted on the 18th green of the Pebble Beach Golf Club, the Concours d’Elegance provides those with a passion for cars the opportunity to raise money for people in need. With the help of generous donors and sponsors, as well as many volunteers, the 2018 Concours was able to raise more than $1.8 million for 80 local charities, for a lifetime total to date of more than $25 million.

Everybody loves a parade

Not to be missed—the Pebble Beach Tour d’Elegance portion of the competition, where selected entrants earn the right to join their peers for a slow, salacious drive with their precious cars along the winding roads from Carmel-by-the-Sea to Ocean Avenue. This exclusive event is a crowd-pleasing showstopper—and just one of the qualification rounds for the Concours d’Elegance, the week’s final crowning event.

Some 200 contestants were accepted in 2018 and invited to compete in a variety of well-recognized categories. This year, the “Best in Show” was land-ed by a glorious, fixed-roof, black 1937 Alfa Romeo 8C 2900B Touring Berlinetta, owned by David and Ginny Sydorick of Beverly Hills, California. The Sydoricks’ car was originally launched at the 1937 Milan Auto Show and later exhibited again in 1938 in Berlin. A beauty on all counts, but heralded as a very safe, conservative choice by the judges in the minds of many.

See you at Werks

One of the many events of the Monterey Car Week that makes the hearts of Porsche owners beat faster is the Werks Reunion—a chance to display their cherished vehicles in the Porsche Corral or on the Porsche Judged Field. Created and hosted by the legendary Porsche Club of America to celebrate both the camaraderie of being an enthusiast and the Porsche marque, this year’s Werks Reunion brought together a newsworthy gathering of gleaming 911s that covered the course as far as my eyes could see. At Werks, Porsche owners have the opportunity to proudly display their cars alongside others in their model type. While participants are not considered in judged

competition, those who meet the requirements are eligible to win one of more than 20 titles, grand prizes provided by Michelin and bragging rights, of course.

As the organizers suggest, the popular event, held at the fairways of the Corral de Tierra Country Club each year, is “not a contest of who has removed dust from the deepest crevices of their car but a judged show that rewards a Porsche that has been lovingly maintained and presents itself well on the field.” Judges rank cars by pre-agreed attributes. And to give the assembled Porsche family a glimpse into the electric future of mobility, a gleaming white Mission E Porsche Taycan made a cameo appearance and drew many questions from the hard-core Porsche crowd.

Show me the money

But there is more than show and tell happening at the Concours. Excited visitors crowd around automotive treasures while international collectors or hobbyists from 37 countries around the globe try to outbid each other during the high-stakes, high-adrenaline RM/Sotheby’s auction. An amazing 90 per cent of bidders are actually there in person— the energy is electric. From American classics to historic racers and rare modern supercars, the thrilling two-day auction raised millions, with 83 per cent of all cars offered finding new homes. The lots here are so exquisite, they’re only rivalled by the spectacular cars on display in the Concourse d’Elegance.

This year there was a new record for the most valuable car ever sold at auction, with an opening bid at an unprecedented $35 million. With three collectors bidding via telephone, sometimes moving in million-dollar increments, a prized 1962 Ferrari 250 GT was sold for a final bid of $48,405,000. Another stand-out: A 1963 Aston Martin DP215 Grand Touring Competition Prototype roared onto the auction block and achieved a knuckle-biting $21,455,000, becoming one of the most valuable British cars ever sold at auction.

By the time we get to Friday, the atmosphere is not just charged with the whiff of premium gasoline, but also with excitement for The Quail, A Motorsports Gathering—a highly coveted must-see and be-seen event on the Monterey Peninsula. My press pass gets me almost anywhere, but I’m told tickets for The Quail are so in demand they’re sold through a well-organized online lottery system. Luckily, I win the lottery and am in.

Set in a beautiful garden-party atmosphere at the Quail Golf and Country Club, I find myself rubbing elbows with owners who have brought with them some of the most exquisite and sought-after treasures on four wheels. Imagine icons from the past and one-off prototypes that offer a sneak peak into the world’s automotive future. Fall-in-love favourites include a perfectly restored Thomas Flyer, a 1935 Delage D8-85 Cabriolet and a stately 1930 Rolls-Royce Phantom 1.

For those guests with an itch in their wallet and a bank account to match, Bonham’s was also at The Quail to host its 21st Annual Motorcar Auction. With many of the sales exceeding $1 million and the win of the night topping out at the $4 million mark for a stunning 1937 Mercedes-Benz 540 K Roadster, it’s no surprise that we were somewhat gob-smacked (to say the least).

However, Porsche stole the show on the grounds of The Quail next to the fairway with a breathtaking display of hand-picked beauties curated in honour of the company’s 70-year history of automotive innovation. From the famous 356 that was first road-certified in Austria in 1948 to the latest electric Taycan, there was certainly plenty to celebrate and many a famous elbow to rub. Throughout the day and well into the night, lovers of all things Porsche sang happy birthday in style. Deservedly memorable.