It’s not often that we come across a true alchemist, but Ben Branson is clearly one. He’s not only the founder of Seedlip, but also the owner of an original 1651 edition of John French’s The Art of Distillation. Despite the fact that Branson shuns strange robes and tinkering around with bubbling flasks in a medieval-style laboratory, he has managed to develop a world-beating non-alcoholic distilled spirit, inspired by French’s tome and a sickly sweet “mocktail” served in a London bar.

With farming roots deep in the UK’s Lincolnshire Fens dating back some 320 years, the idea of distilling herbs, lavender flowers and natural ingredients foraged in the fields and hedgerows was perhaps in Branson’s DNA.

Today, each bottle of his Seedlip begins its slow-as-the-countryside journey with ingredients as varied as peas, hay, herbs, tree bark, ginger and citrus peels. Each of these is individually macerated with American oak blocks and steeped in natural grain spirit for two weeks. The resulting liquor is evaporated during distillation in a copper-pot still. What remains is a rude distillate that many would put aside, but Branson’s alchemical finesse is in his blending—a painstaking process of adjusting the ingredients for their natural seasonal flavour differences. The result, six weeks later: A pure spirit, free from added sugar or sweeteners.

In 2015, Branson’s first batch of 1,000 bottles of his Spice 94 sold out at the upmarket London store Selfridges in just three weeks. His next batch only lasted two days. Now, 6,000 bars around the world and 250 Michelin-starred restaurants offer cocktails made with Spice 94 and its cousins, Garden 108 and Grove 42.

While Branson styles Seedlip as “What to drink when you’re not drinking,” it makes for a remarkable cocktail in its own right. It’s not recommended to drink it neat; rather, it’s often mixed with Fever-Tree, makers of arguably the best tonics and soda waters.
Each spirit has its own character. Spice 94 is aromatic and, well, spicy; Garden 108 has herbal notes; and Grove 42 hews towards citrus, with ingredients of orange peel, lemon peel, ginger, lemongrass and a “prickle” of Sansho peppercorns. Branson tells me that Grove 42 pairs well with Asian food, duck and chocolate desserts, or can be frozen as a sorbet. Spice 94 works with meat and curries, while Garden 108 is a natural complement to fish and salads.

My favourite cocktail is two ounces (50 ml) of Grove 42 mixed with Fever-Tree tonic and served over ice, garnished with orange peel. It’s is a complex drink. There is zest from the citrus, subtle sweetness, hints of ginger and a slightly spicy, palate-cleansing acidic bite. A lovely sipping cocktail. Remarkable. And after three, I’m still stone-cold sober. Now that’s alchemy.

I’ve noticed that Seedlip is available at most Pusateri’s and Yonge Street’s Harvest Wagon. It can also be found
on the cocktail menu at Momofuku and Canoe.
seedlipdrinks.com

My breakfast these days is healthy. Typically, muesli with yoghurt, fruit and nuts. But, at times, I must admit that I hanker after what barrister Horace Rumpole, the irascible protagonist in John Mortimer’s books about Rumpole of the Bailey, calls “The great greasy British breakfast.”

But where in downtown Toronto? I’m tired of all-day breakfast places and hotels that offer a warmed-over buffet of gelatinous scrambled egg.

Enter Evviva on Lower Simcoe Street, just down from Bremner Boulevard. It’s a little off the beaten path in the lower reaches of South Core—or SoCo, as trendies like to call it. But it’s well worth the walk. It’s justifiably packed, particularly on Fridays and weekends, when line-ups spill off the patio and onto the sidewalk. Weekday breakfasts are a better bet.

The dining room has a spare elegance that falls somewhere between a hotel restaurant and a nice café. And the staff are always friendly and efficient. Brownie points! My weakness is smoked salmon eggs benedict, served with astonishingly good home fries. Ridiculously indulgent! But I can convince myself that the salmon somehow tips the balance toward the healthy side. Dream on.
evviva.ca

Coffee. Over the years I have been fickle. Drifting back and forth with different beans, an assortment of machines and contraptions, environmental concerns over coffee-pod packaging…

For such a simple roasted bean, the countless ways that have developed to prepare and source it are astonishing. Everyone has their preferred blend and style. Fair trade? Single farm? Ecologically friendly? Shade grown? Some are fiery advocates of percolators, while others prefer cone filters, French presses or hissing, steaming machines that are a cross between a one-arm bandit and a juke box. Next up…How fresh are the beans? Do you store them in the fridge or in an airtight package? And don’t dismiss the value of the “burr” grinder.

I was recently able to see the full line-up of DeLonghi coffee machines. These folks know coffee. I was intrigued and initially confused. I was drawn first to the company’s beautifully designed Nespresso machine. It features a spare, Bauhaus-inspired look that would complement a neutral minimalist kitchen. (And, after all, I already own a Nespresso machine for those times when I’m too rushed to haul out all the equipment to brew my coffee. It’s a reasonable compromise and the pods are now recyclable.)

But what really caught my eye was the Dedica DeLuxe Manual Espresso Machine and Cappuccino Maker. At just six inches wide, this is a tactile wonder. An updated but old-fashioned mechanical wonder. A romantic steam locomotive in the world of diesel, but with just enough electronic input to ensure a perfect result. I was in love. I could see myself happily indulging in barista fantasies.

And then I tinkered with one of DeLonghi’s flagship products: The Eletta. If you have the counter space, this combines the ease of use of the Nespresso with the hands-on results from the Dedica. And more. There’s a built-in burr grinder and a container for the beans, as well as a separate container if someone wants decaffeinated coffee. But it’s the gee-wizardry of the machine that impresses.

Fussy guests who want a barista-style layered espresso beverage with a dense rich foam, a cappuccino, café latte, Americano, macchiato or flat white? Not a problem! This machine delivers at the touch of a button. And the menu is in 16 languages. Even my hound Rufus could probably turn out a winning drink with this. Although getting the cup to me without spilling would be another matter…

The integrated milk container delivers steamed milk for that delightful foam. The container even has an automatic clean function and can be stored in the refrigerator between uses—easy clean-up and no waste. A built-in water filter ensures that no errant flavours creep in to mar one’s drink. And there is even a warming plate on top to heat the cup before dispensing the beverage of choice. The manual runs to 25 pages of tweaks and customization.

If you can’t make a perfect coffee with this machine, there’s no hope for you. 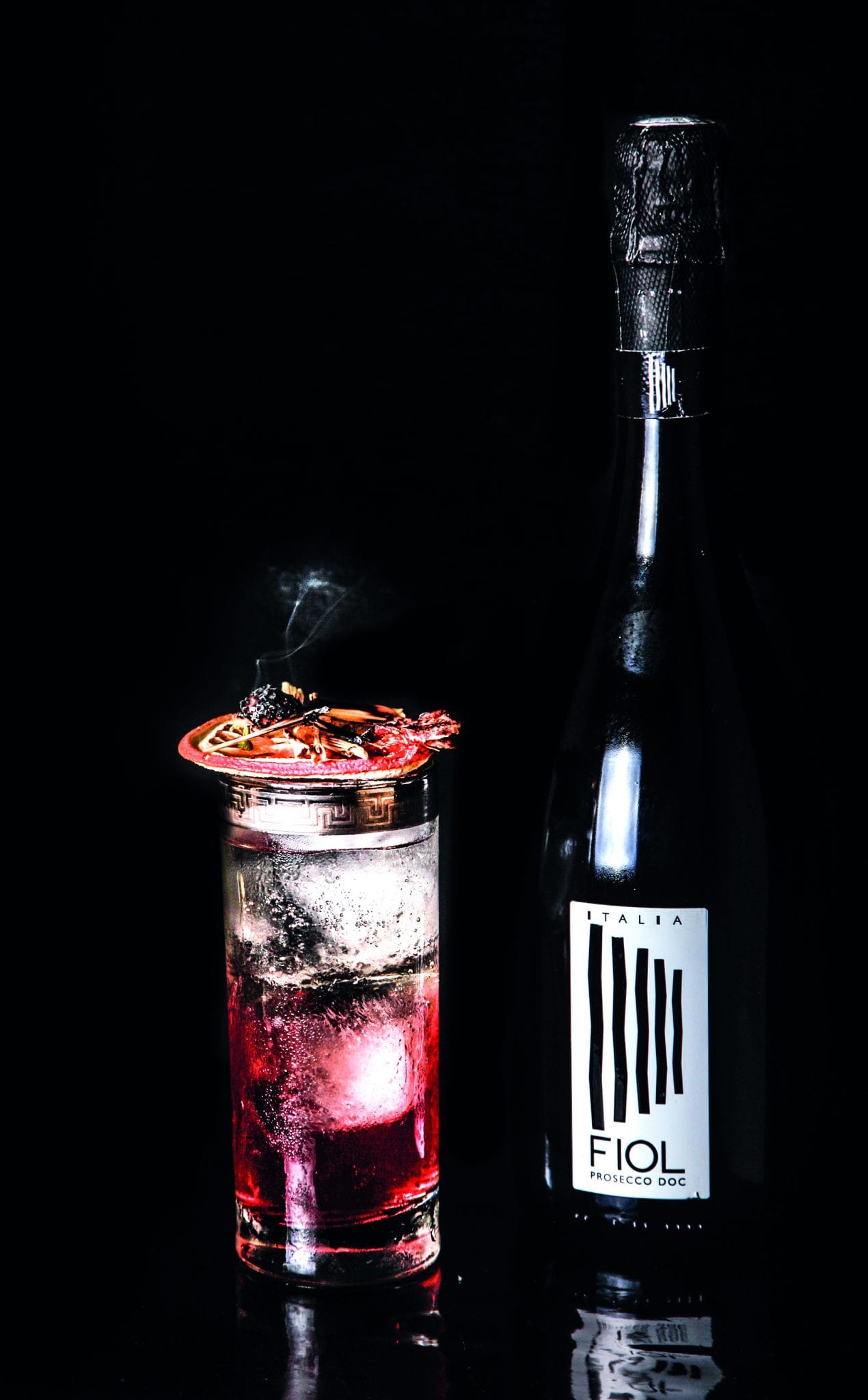 Lively but not overbearing, Fiol is an extra-dry Prosecco with a light straw colour and a bouquet of wisteria, mature crab-apple and acacia. Produced in Veneto by a group of friends who are wine enthusiasts, Fiol is their personal tribute to a way of living in the moment that’s deeply rooted in the region. As says Homefront’s own wine reviewer, Natalie McLean: “Excellent value for this toasty, crisp Italian sparkling wine. Serve as an elegant aperitif or a companion to fresh seafood.”

How did we Fiol? With a bespoke drink called “Mother of Soul,” a homage to Aretha Franklin, one of the greatest singers of all time. Try it yourself: Stir together home-grown orange kombucha with a sous vide infusion of Ontario cherries and red plums with French sweet vermouth; then balance with freshly squeezed lemon juice and finally top with sparkling water and Fiol. It is a Collins-style cocktail, just softer. Garnish with a dried orange and dried citrus pulp.

Homefront’s man about town is suave, debonair, charming and, best of all, extremely curious. He hunts, sleuths, discovers, explores and tells all.