The meandering epicurist: Our man about town shares his latest findings

I have come to a bijou shop at 12 Tank House Lane in the Distillery District to meet the woman described as a chocolate artist. And she is. Laura Slack’s creations are not just made of the finest chocolate, but are covered with hand-painted and hand-wrapped packaging, formed into “bronzed” skulls for Halloween and blended into intriguing flavours such as black garlic and lion’s paw (bitter caramel with salt). For Christmas, exclusively at this location, there are expresso shots of drinking chocolate and several new features Slack is ready to try out. Customer tastes vary, she says, with the clientele at her own store tending to be willing to try her more adventurous creations. I concur. Her chocolate can awaken a jaded palate.

Slack is no dilettante. She has earned her stripes—first with a science degree and then through the George Brown Baking and Pastry Arts program. This was followed by time at the Callebaut chocolate academy. From there, an internship at Knipschildt in Norwalk, Connecticut, where Forbes Magazine recognized the chocolatier’s La Madeline au Truffe as the most expensive chocolate in the world. Back in Canada, Slack worked as the pastry chef at Nota Bene restaurant until she decided to set up her own business nearly a decade ago. “I went in a bit naively” she confides. I’m glad she did.

Whether you chocolate-shop uptown, midtown or downtown, you owe it to yourself to try Slack’s edible artwork.

In tea shops in England, be very wary of whose clotted cream you’re eating. This is a serious business!

Clotted cream is simply thick cream that has been gently heated until it has the consistency of wall plaster and ends up with an astounding 55 per cent butter fat. (Health professionals should stop reading now.) Nothing is as indulgent as this gloriously rich dairy wonder. But why the dispute? First, the adjoining counties of Devon and Cornwall barely speak to each other over who invented or makes the best clotted cream. And then there is the vexed issue of how it’s used on traditional scones as part of a traditional cream tea—does the jam go on first followed by the cream, or the other way around? My take on this (please put down that butter knife, someone may get hurt) is whichever way allows the maximum dollop of cream.

In Canada, owing to restrictive quotas, the clotted cream from the Devon Cream Co. is a rare find. I was overjoyed to find it at Longo’s the other day. Smothered over dessert, friends who had never tasted it were skeptical of the alpine peaks of thick cream, but one mouthful and they were converted. Stock up for the holidays.

Designated drivers or those wanting to be sociable without alcohol have, until recently, had limited premium choices. Craft beer lovers now have reason to rejoice as the UK’s Big Drop Brewing enters the Canadian market.

I recently sampled two products soon to be introduced at the LCBO, along with some others currently only available in the UK. Remarkably, these 0.5 per cent alcohol (regulated to 0.4% in Canada) craft beers have the taste and mouthfeel as regular craft beer. So how did this remarkable achievement come about?

Rob Fink, the founder of Big Drop, was originally a lawyer by trade. Not content to follow the crowd and make beer then remove the alcohol, he came up with a new idea—why not brew it traditionally without the alcohol? “Making a good beer first and foremost” was his mantra, he tells me. And, after a lot of trial and error, he seems to have succeeded.

The Pale Blanche (the LCBO would not let him call it Pale Ale) has lovely citrus notes on the nose, followed by a hoppy citrus bite on the palate. I try it out on friends who are beer aficionados. They marvel that this could be alcohol free. My favourite, however, is the Dark Noir, a stout with remarkable coffee and cocoa nibs on the nose and dark rich caramel notes on the palate. Cheers! 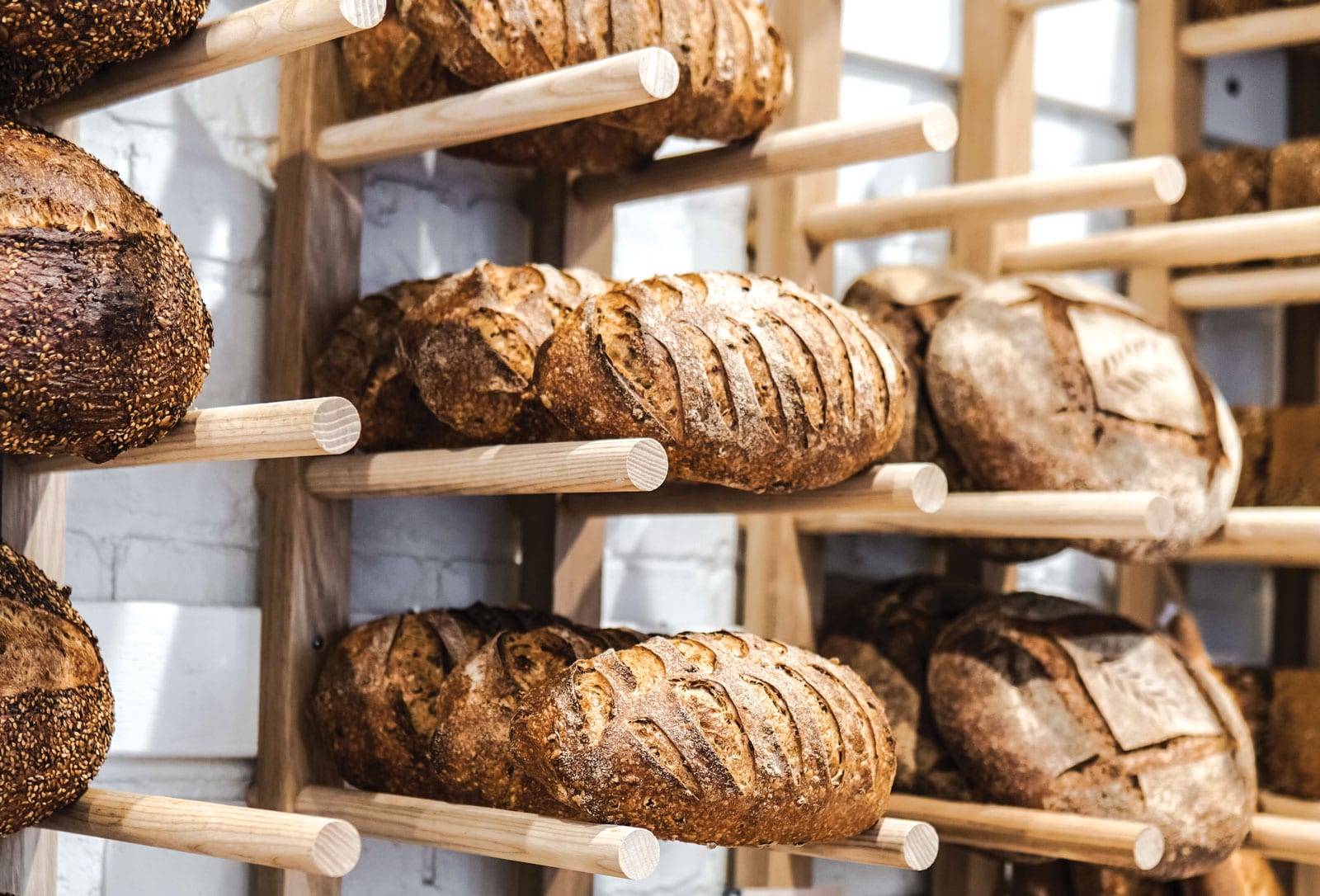 Most bakeries don’t have to worry about flour dust explosions. Brodflour, in Toronto’s Liberty Village, does. Every evening, staff grind their own grain on a special stone milling machine from Vermont. And in the early hours, bakers turn it into the freshest, tastiest bread you are ever likely to eat. Unique!

This extreme freshness, founder Dara Gallinger tells me, is the bakery’s secret sauce. The bakers think of the grain reverently as a living thing. But this may not be the only reason behind the business’s success. Its path to the perfect loaf was excursive. It started with Gallinger travelling the world to find the best bread. She found it in Sweden and engaged Robin Edberg, owner of three Stockholm bakeries, as her executive baker. He provided the Scandinavian inspiration and recipes.

Then, farms had to be visited and the absolute best grain carefully sourced. Some comes from Brandon, Manitoba, but every few days a farmer from Peterborough with mud still clinging to his boots drops off grain and takes back the bran to feed his animals. But it doesn’t stop there. For Brodflour’ssandwiches, Gallinger and Edberg found salted cultured butter from Quebec and locally produced Saskatoon berry jam. Even the bakery’s coffee comes from an artisanal roaster in Calgary. That’s truly attention to every detail.

Brodflour’s Scandinavian ethos echoes in the natural light, pale wood and white painted décor of the site. The delib-erate absence of Wi-Fi and thepresence of a communal table encourages—gasp—patrons to talk to each other. There is even a well-worn book on Danish Hygge if you just want to hunker down and cozy up.

Currently Brodflour supplies some high-end restaurants in the city but retail is only from Liberty Village, although there are plans for more stores. This is a bakery well worth the drive.

Vodka coolers are often derided as oversweet and unsophisticated. Thankfully, Greg Gilliland, a pharmacological scientist and founder of Crafty Elk (based in London,

Ontario) is out to change that. He calls his coolers a “smart choice.” They’re a cleaner drink that “let’s the next day be the best day,” he says. Gilliland enthusiastically rattles off why. Crafty Elk products contain no chemicals, additives, added sugar, preservatives or artificial sweeteners. The ingredients are organic and non-GMO. Oh, and the vodka is one of the best from Piedmont, Italy.

Real juice and vegetables provide colour. Turmeric is added as an anti-inflammatory to offset the alcohol. Ginger in included for its health benefits. Prickly pear, which is high in vitamin B3, promotes enzymes that help the liver process alcohol. And finally, goji berry has massive amounts of vitamin C. I’m all of a sudden at the point where I’m beginning to wonder why

it’s stocked in the LCBO and not in health-food stores. But the real test is the taste.

I opted to sample three flavours. First, the Cranberry, Blackberry and Acai boasts understated fruits with a balanced acidity. It comes across more like a cocktail than a cooler. Lovely. The Blackberry, Passion Fruit & Green Tea has dark berry flavours that balance the lighter, more restrained passion fruit and offers a refreshing tartness, perhaps from the green tea. Excellent. But, my favourite is the Mango & Honey. It’s smooth and elegant with a natural sweetness. All smart drinks—and quite crafty.