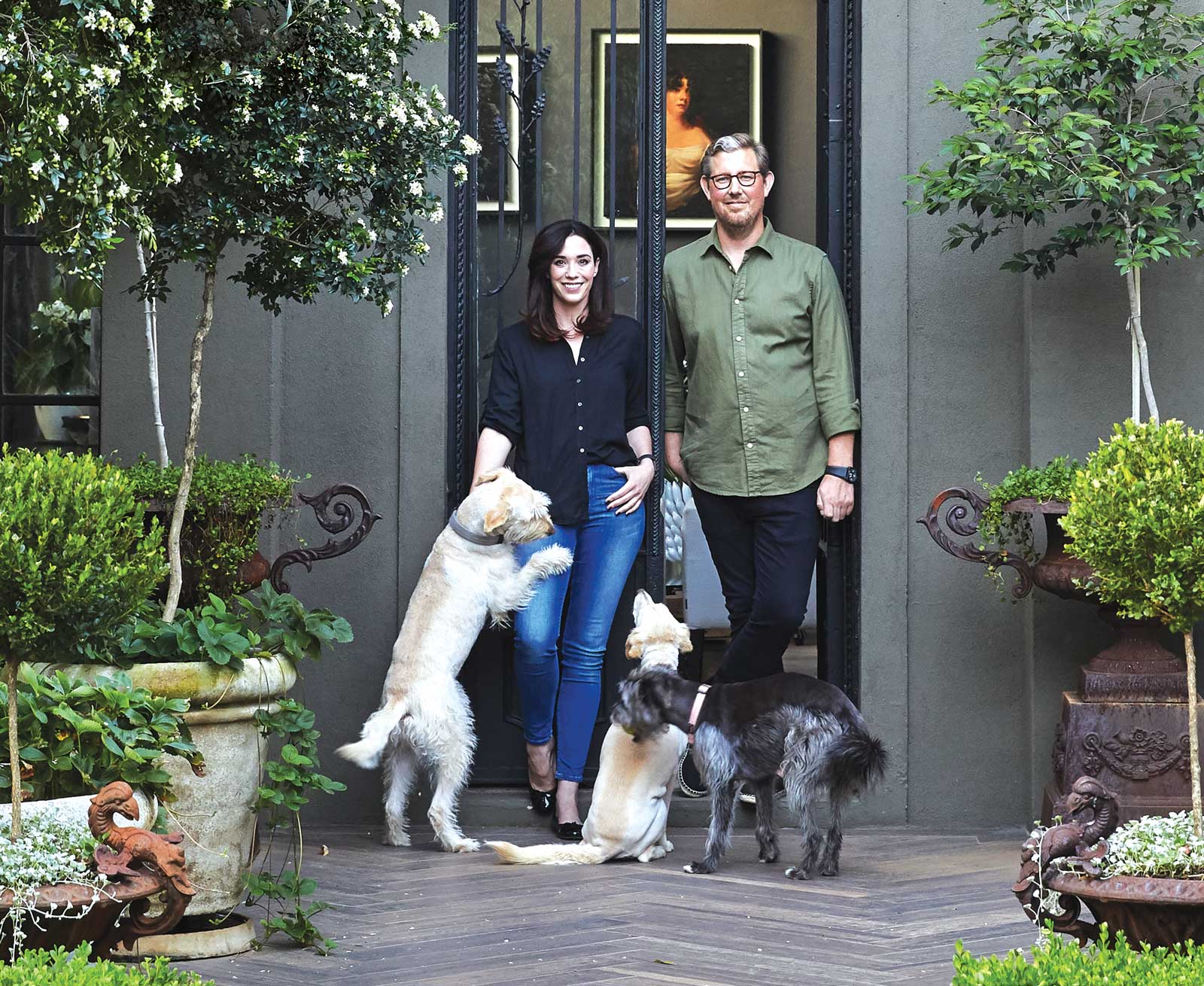 The muted glamour, endless volumes and monochrome palette of this converted cottage colour everyday life with a touch of magic.

The design of Christian van der Walt and Anli Jones’ home began with a door. They came across a tall, narrow, wrought-iron chateau door in an antique shop near to the cottage they’d moved into. The door was rusted and had no glass in it, and no handles, but it awakened a vision. “We thought: This is great,” recalls Anli. “Now, how do we make it work?”

The house, as it is now, is largely a response to that question. What began as essentially a granny cottage that was once an outbuilding on a larger plot with a grand house has since been converted. Today the cottage is hidden at the end of a panhandle along a bumpy, narrow driveway. When the couple first moved in, it had yellow painted bricks, knotty pine ceilings and charming avocado bathrooms!

Christian, who works in the field of special effects and animation in film and advertising, and Anli, who has a background in fashion design, created the interiors themselves. With the door in mind, they sketched ideas on napkins over many dinners, and eventually a plan started to emerge. 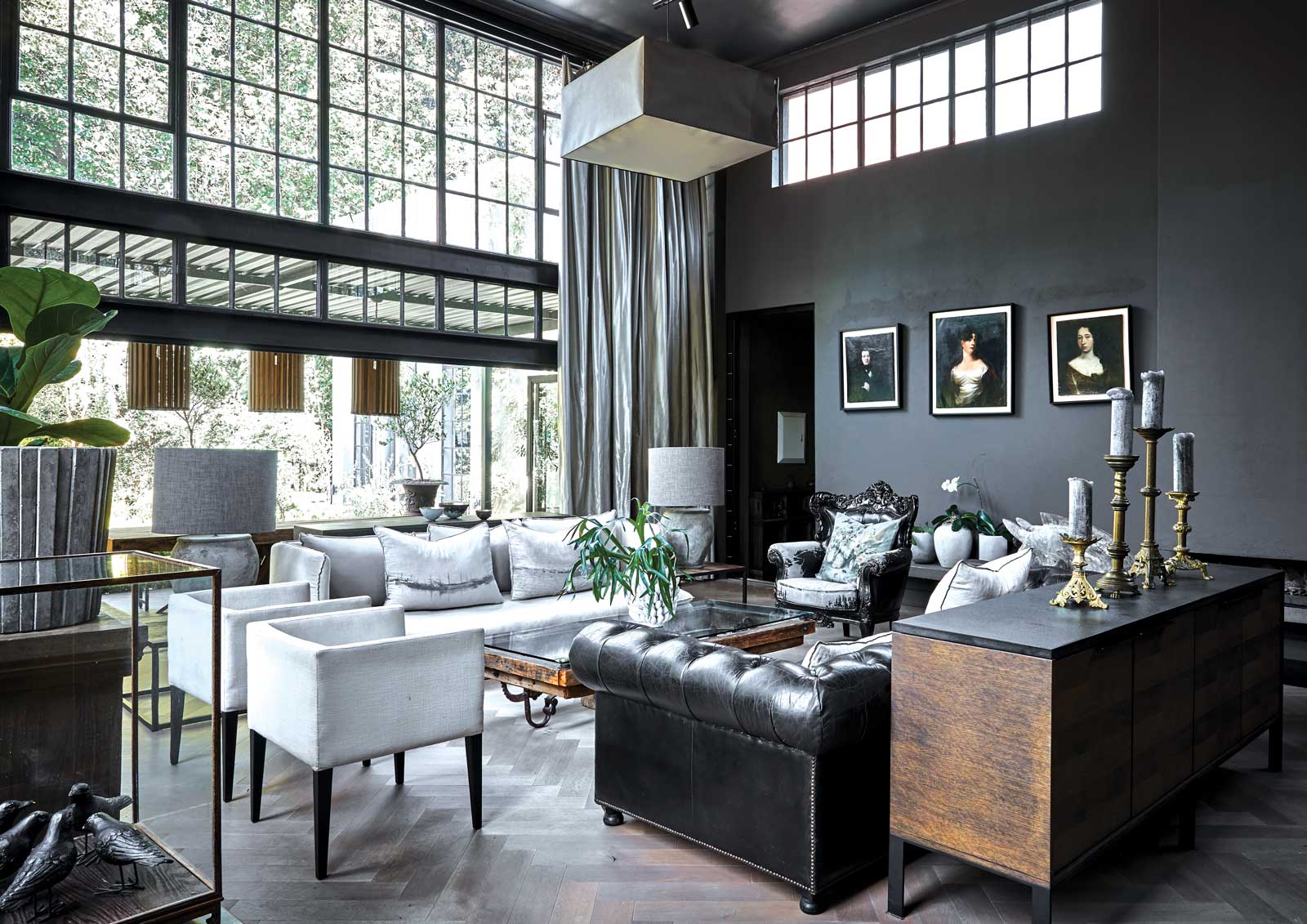 “At my last office, my neighbour was the owner of an architectural firm,” says Christian. He ended up helping the couple to create cinematic “visualizations” for some of their ideas, developing three-dimensional renditions of rooms from his architectural sketches. Then, together, they worked up the plans.

Over three years, Christian and Anli went about transforming the cottage into a kind of modern tower in an enchanted garden. “We did it in stages, so we used the layout of the old building and just enlarged and extended,” says Christian. As they built in one area they lived in another, until they’d come full circle. “Exactly as you shouldn’t,” he adds.

Originally, the ceilings were meant to be the height of the tall antique door, which Christian and Anli had had beautifully restored, but one evening during construction, when the duo arrived home from work they discovered the builder had mistakenly added an extra metre to the wall. “He said to us, can we leave it?” recalls Anli. They conceded that it would be more work to undo what had been done, and so they went with it.

The exaggerated volume, particularly in the central living room and the adjacent study/guest room—for which the ironmonger who restored the original antique door created a matching replica—is at the heart of the character of the house. The height, combined with the black walls and the monochrome furnishings of the interiors, creates an almost undefined sense of space: “Limitless,” as Anli describes it. Especially at night, you’re almost unaware of the ceiling and the walls seem to recede, simply enveloping the interiors in a dark, velvety atmosphere of mysterious luxury.

Not your standard white cube

Contrary to the standard idea of a white cube, the dark walls are a trick Christian says he has noticed in a number of art galleries. “I looked at a photo of the Louvre, and it was the same setup,” he says. The National Gallery in London has never had white walls, and he noticed it again at the Scottish National Portrait Gallery in Edinburgh. “The walls disappear, but they also make whatever you put in front of them pop,” he says. “You’re seeing the things in the space, not the space.”

He calls the house a “showcase space,” because the couple’s eclectic collection of art, artifacts, books and furnishings come to life in the chiaroscuro of each room, as if in a cabinet of curiosities. There are local, up-to-the-minute artworks and restored portraits in oils picked up at auctions.

The atmosphere takes on an almost fantastical dimension, a kind of glamorous glimmer that also seems to resolve the combination of antique and contemporary design. The two sofas in the centre of the living room sum up the basis of the interiors: An old, beaten-up black leather Chesterfield and, opposite, a modern cream Italian piece. Almost everything, if it doesn’t have a metallic glint, is either black or white…mostly black. The atmospheric lighting imparts sparkle and romance. “It’s like a little romantic hole in the wall,” says Christian. “When you have the candles on and the fire going, it really is magical.” The dark exterior walls also work to emphasize the greenery of the garden, rather than drawing attention to themselves. Christian and Anli have planted a beautifully lush formal vegetable garden (“It never seems to know when it’s autumn or winter,” says Anli. “I think it’s incredibly sheltered, so it stays green all year”) and there are box hedges and olive trees that create exterior rooms for al fresco dining and entertaining. The air is scented with lavender. There are even quails, which have had chicks. “They look like popcorn!” exclaims Anli.

This almost pastoral dimension of life down the panhandle is an exploration of urban green space that Anli and Christian find affirming. “The ability to live like you’re in the country, but in the city, is something we aspire to,” says Christian.

Despite their home’s heady combination of whimsy and glamour, the satisfaction Christian and Anli find in activities such as cooking with herbs from their own garden, while living in what is essentially a rapidly urbanizing area, is a surprisingly contemporary ideal.

A haven of beauty

But then again, Christian and Anli are firm believers in functional aesthetics. The copper pots and pans in the kitchen—and the crystal chandelier—are undeniably beautiful but, says Christian, it’s all part of taking pleasure in ordinary things. “It’s about the joy of everyday objects,” he says. “If you’re going to cook three meals a day, then it might as well become something that you love doing.” And if you’re going to live in a place, it should be uplifting.

The romance of this suburban castle is not so much an escape from everyday life as a haven of beauty and glamour—and more than a little fantasy—that paradoxically grounds Christian and Anli. It makes, they say, being at home a “worthwhile experience.” 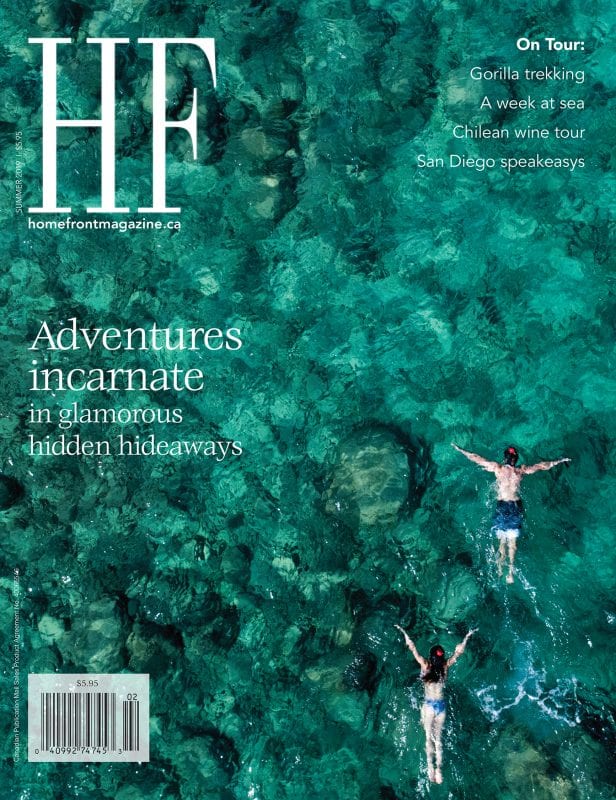 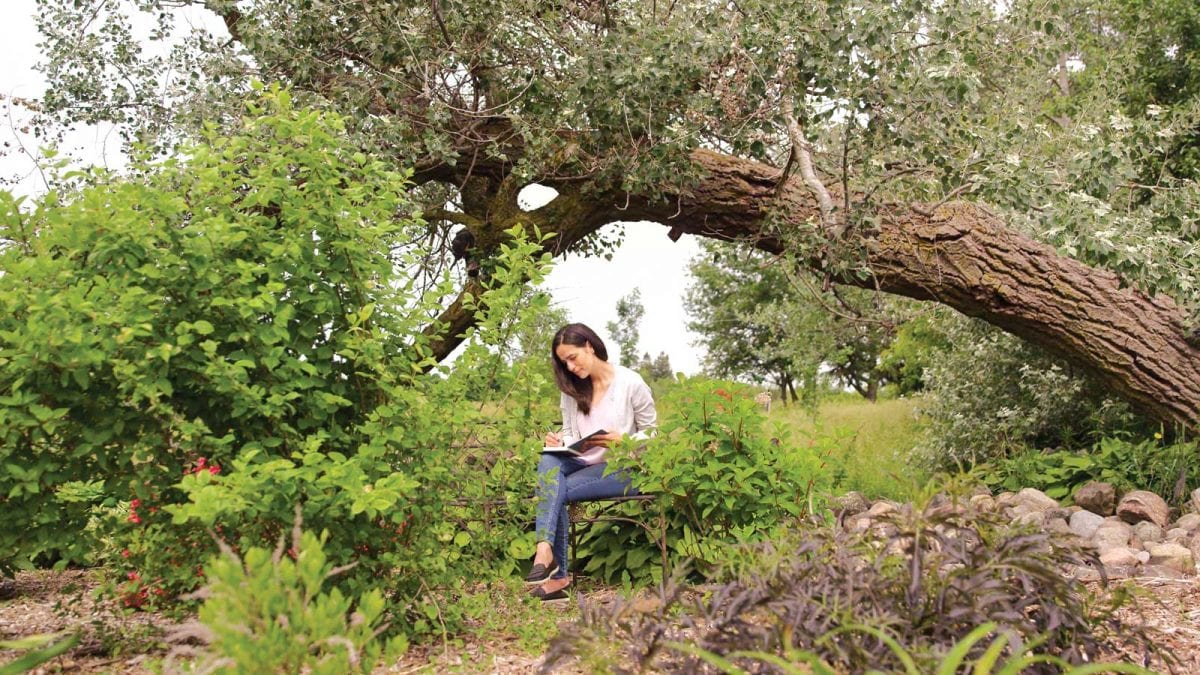 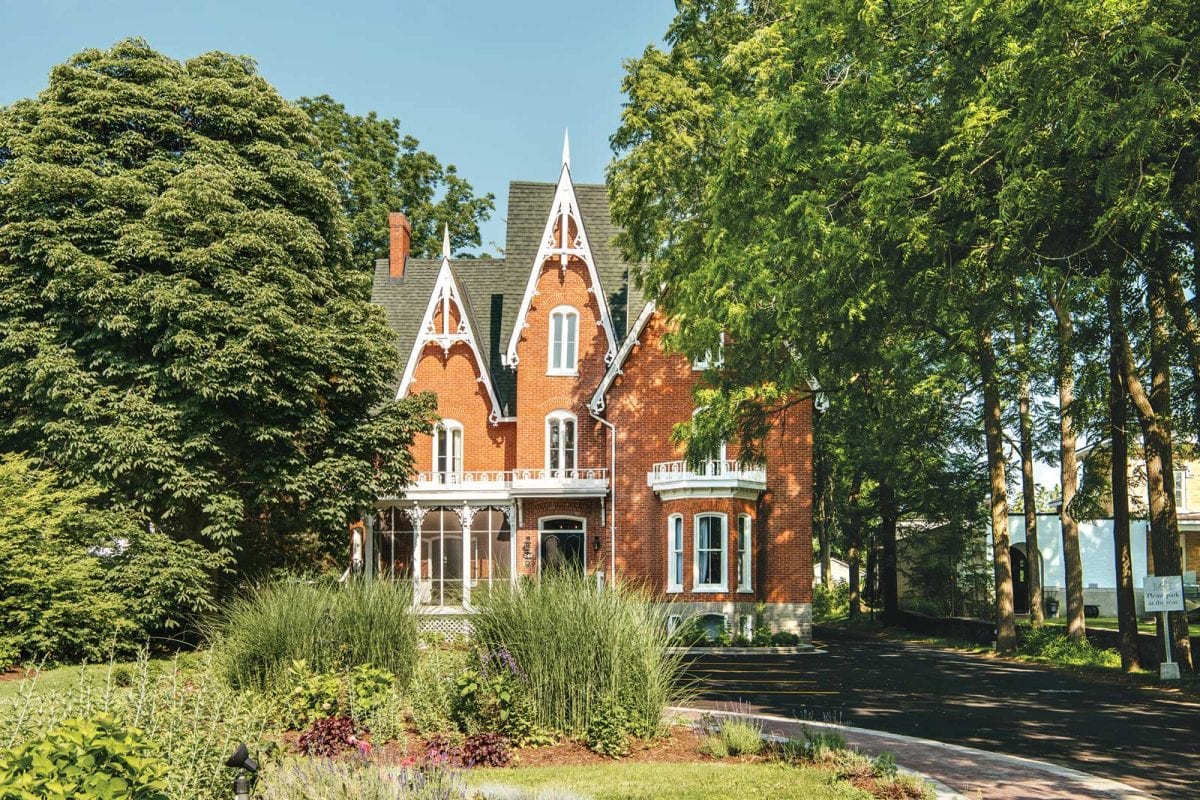 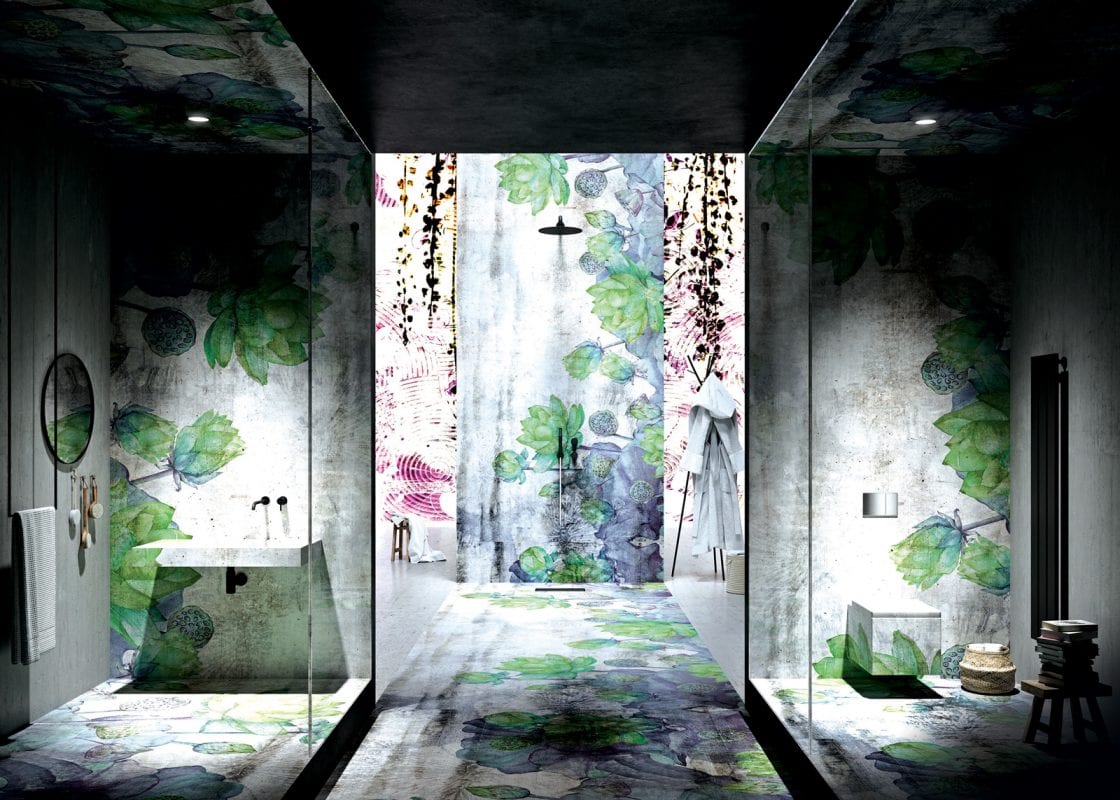 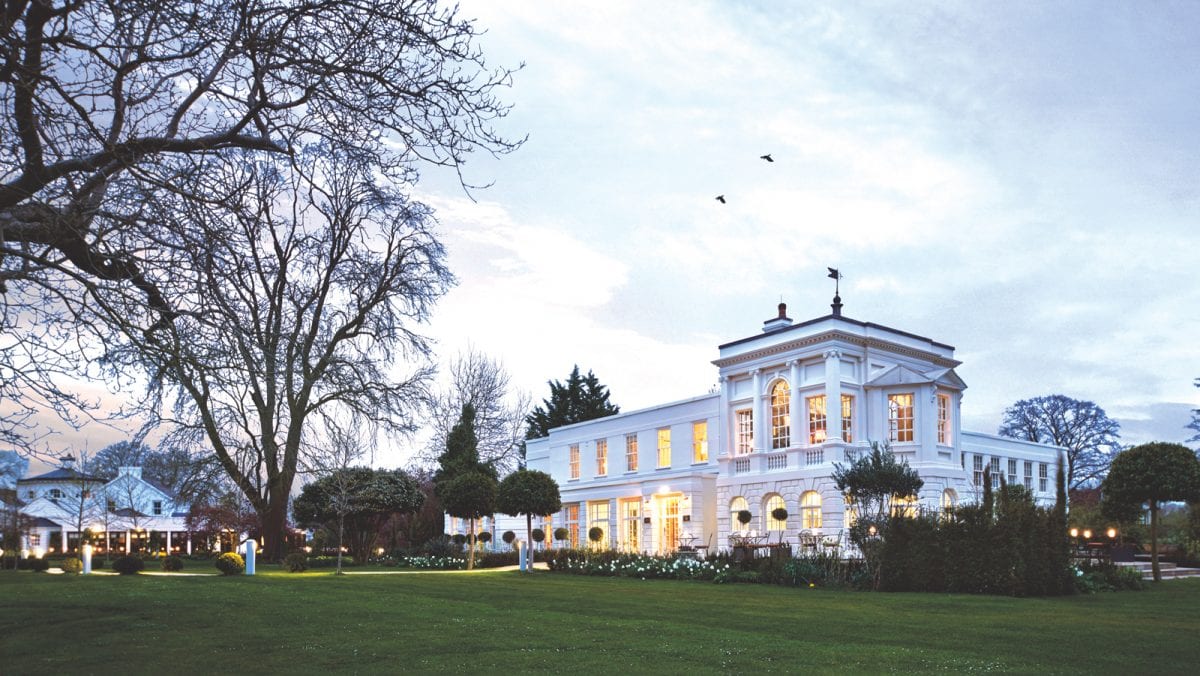