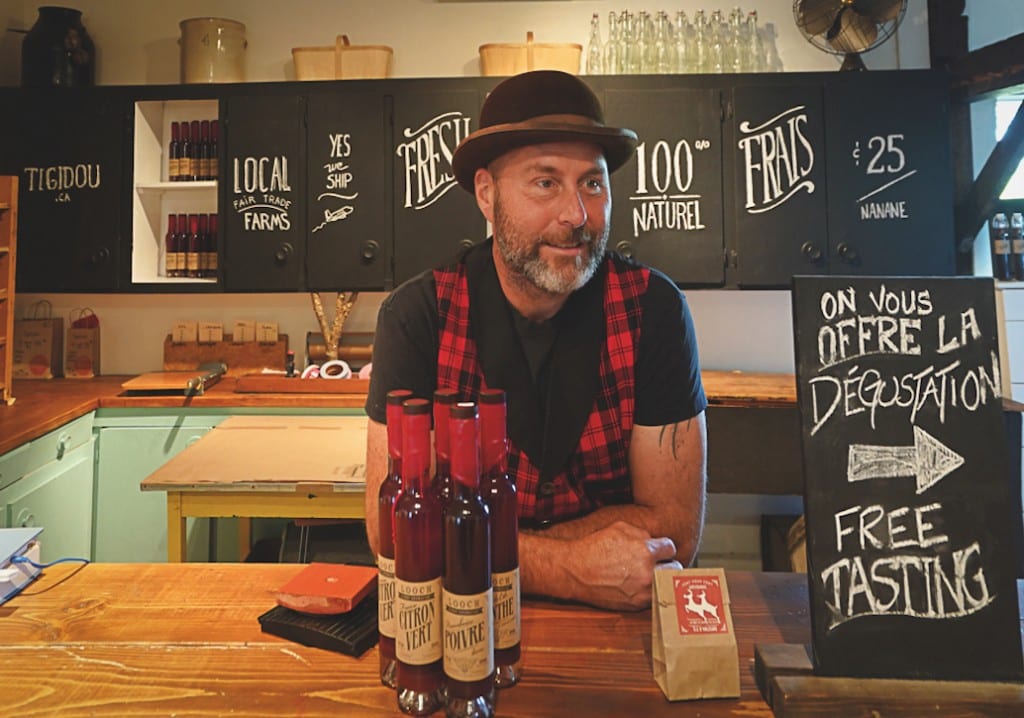 “Indian food is not just butter chicken,” says Anjum Anand, owner of The Spice Tailor, who is in Toronto to launch her line of Indian foods. I watch closely as Anand cooks a meal in front of our media huddle. Something a home cook would take two hours to finish is ready in 10 minutes. Apart from some chicken, seafood and rice, all of the other ingredients come out of her packages.

Within less time than it takes to write this, she’s produced several different dishes using her own sauces: Tikka masala, delicate korma and, yes, classic butter chicken. The results are delicious, flavourful and mildly spicy but never hot. One of my personal favourites, the usually labour-intensive black daal (lentils), which I tried later at home with remarkable results, is ready within minutes. It’s creamy, with layers of rich, earthy flavours. By adding fish, meat or vegetables you can satisfy either vegans or carnivores, but Anand recommends using grain-fed, naturally raised chicken complete with bones (apparently, chicken raised with growth hormones gives off too much water), marinating the chicken overnight and not browning it. Curiously and counterintuitively, she throws in a small amount of water at the end to give the dish a creamy mouth feel.

All of Anand’s goods are produced in India to exacting organic standards. The herbs and spices are regularly adjusted as their intensity is affected by climatic conditions such as the monsoon season. Although not publicized, Anand’s products align with her interest in Ayurveda. As she puts it, “I look for ingredients that are good for my body: Ginger, garlic, turmeric, fenugreek, cardamom—it’s almost health food!”

Brought up in London by Indian parents, Anand became appalled by Indian prepackaged food in supermarkets. and set out to change it. She has since become a television celebrity and written several cookbooks, the most recent of which is I Love India. Here, her products can be found at Longos and Sobeys.

My first taste of beer amounted to aversion therapy. I now know why. Near where I grew up in England it was rumoured that the local publican had a flexible grasp of the licensing laws, poor eyesight or both. Standing on tiptoe I ordered my first pint of best bitter. It did not go well. It was, well, bitter.

When I arrive at the Town Crier Pub in Toronto’s Entertainment District, a coterie of beer aficionados and Rudi Ghequire, brewmaster at Rodenbach, are eagerly discussing such exotica as the pH levels in beer. I am attending a tasting of a range of Ghequire’s sour Belgian beer. I sheepishly admit I’m more of a wine drinker, but he’s not deterred. Rodenbach, he tells me, is “the missing link between wine and beer.”

Ghequire goes on to explain that an appreciation of bitterness requires maturity and experience, neither of which I exhibited as a boy (and, some would argue, now).

I try the Classic, an oak-cask-matured Flemish red-brown ale with an interesting yin and yang of sweet and sour fruit. Ghequire tells me that all his beers “have the complexity of wine but the refreshment of beer.” I sip some more. He’s right.

Apparently, this beer’s thirst-quenching property comes from its sourness, something one’s palate normally doesn’t seek out any more than bitter. Now in full flow, Ghequire reverts to his pH lessons. The pH of water is 7, sparkling water is 5.5 and lemon juice is 2.8, while beer and larger are in the low to mid 4s. Which explains why the Classic does not have a puckering sourness, but rather a counterbalancing, palate-clearing taste.

The vermicelli di gragnano with mackerel, pine nuts and a tuna purée hints at a more classical dish. I’m urged to mix up the beautiful presentation to appreciate the flavours. It seems a shame, but I do as I’m told. And it is worth it. This is a dish of smoky, spicy, al dente elements, powered by a subtle richness from the fish and olive oil. Sublime. The La Rocca Soave Classico pairing is crisp and fresh, with some delicate toasted oak and tinctures of herbs and flowers.

Next arrives Chef’s newly discovered best meat in the world—bison in rustic bread crust. The rare tenderloin is wrapped in Swiss chard and mozzarella, and is remarkably moist and tender. It has a buttery earthy flavour that contrasts well with deep herby notes from the salsa verde and spicy elements from the tomato chili reduction. Again, the wine pairing is spot on. The 2011 Brunello di Montalcino is a velvety, balanced wine with just the right amount of heft.

Dessert is a delicate flaky pastry that is native to Campania, filled with cinnamon-infused pasty cream. Its restrained sweetness has a counterpoint in the assertive dark cherries. With another nod to Canada’s bounty, it’s served with a 2001 Peninsula Ridge Cabernet Franc Icewine. And there’s a lovely end to the meal as, with a final theatrical touch, petits fours arrive in billows of liquid nitrogen. This is dining raised to an art form. Spectacular.

“Are the new gins really gins or flavoured vodka interlopers?” This rhetorical question comes from my interlocutor at the Juniper Garden Party—an event put on by the LCBO and the UK Department of International Trade. The questioner is, appropriately, wearing a bowler hat, black jacket and striped trousers. Every inch the London city gent of 50 years ago. Only the furled umbrella is missing. His dismissive words are clearly aimed at creating a fissure in the polite world of gin production.

I confess to agnosticism in this debate. Beguiled by the floral botanicals of the new gins and the heat-busting incisiveness of classic London Drys, I am just happy to totter between sampling stands testing the wares.

The award-winning Isle of Harris Gin comes from a small Hebridean island better known for its Harris Tweed. In part, the distillery is a social project that provides employment for young people. During the gin-making process, sugar kelp seaweed is harvested by divers. It’s then incorporated into the gin to give it a distinct smooth flavour with a pleasant spiciness that’s cut by the kelp. The gin’s striking blue, almost luminescent bottle by designers Stranger and Stranger echoes both the sea and the cloth’s warp and weft. It’s a worthwhile effort that has not only created a great gin, but also increased the appeal of the island for tourists.

Botanist Islay Dry Gin by Bruichladdich, another Hebridean product, boasts 31 botanicals. Twenty-two are native to the island and foraged by the company’s two professional botanists, who encourage gin lovers to add their own favourite herbs or fruit to a mason jar along with the gin. To illustrate, they’ve rigged up a mad scientist’s series of flasks, filled on one side with pineapple sage and raspberry, through which the gin percolates. Well strained, the result is a delicious, almost cocktail-like drink, harmonious and well balanced.

My bowler-hatted friend sits at the Broker’s Premium London Dry Gin booth. He is eager to tell me about their unchanged 200-year-old recipe, which is distilled in a 170-year-old copper pot still named Constance, after the master distiller’s grandmother. His is a classic gin, redolent of juniper with liquorice and citrus notes. Broker’s is a quadruple-distilled pure grain spirit made from English wheat, to which they add 10 botanicals, which are left in the mix for 24 hours to allow the natural oils to come out. They then fire up the venerable Constance for the distillation process. There is a lot to be said for tradition, because it’s all down to the skill of the distiller in the end: The rules of London Dry gin mean that nothing can be added to the product after the final distillation.

In an interesting contrast, my eye is drawn to a whimsical steam-punk contraption at the Hendrick’s booth. Alvin Ramchurn, the company’s mustachioed Canadian brand ambassador, resplendent in a pale blue suit and yellow bow tie, manipulates massive levers, causing gin to flow down through mounds of ice and emerge as a cocktail. His business card hints at the eccentricity of Hendrick’s as “purveyors of the peculiar,” but this is serious stuff. Hendrick’s won “Distiller of the Year” at the 2018 Icon of Gin Awards.

Weaving my way to the exit, I find myself still agnostic over classic versus flavoured gins. But in my happy state I have completely lost the thread of the argument and wander off home.

Homefront’s man about town is suave, debonair, charming and, best of all, extremely curious. He hunts, sleuths, discovers, explores and tells all.