CLIFTON, CAPE TOWN
A home with the power to make you feel like a film star

Inspired by the heady, futuristic aesthetic of ‘60s and ‘70s modernism, this Clifton home injects some of the era’s glamour and poolside party lifestyle.

High up on Nettleton Ridge, hugging the craggy Cape mountainside and overlooking the Atlantic Ocean, is a vision that might make you think for a moment that you’ve entered a parallel universe. You could be looking at Tony Stark’s Malibu mansion from the Iron Man franchise or a Bond villain’s lair, or even something out of The Jetsons.

And you wouldn’t be far off. This Clifton house, belonging to mining banker Lloyd Pengilly and designed with crucial input from his son Hanno—has its roots in the same US west-coast architecture that inspired all of these filmic fantasies, particularly the work of John Lautner. Perhaps the most famous of Lautner’s designs is the Elrod House in Palm Springs, which is featured in James Bond’s Diamonds Are Forever. Another, the Sheats Goldstein Residence, pops up in The Big Lebowski. They’re LA party pads, rising organically from their rocky mountainsides, their interiors fusing with their vast views: Part stone sculpture, part flying machine.

This house has a similar kind of sculptural presence, at once futuristic and primal. Its swooping curves and waving contours evoke the jet-set era: A time when airports and flying were glamourous and romantic, when space travel had captured the world’s imagination and when cars spelled freedom. It was a time when technological advancement and style crystallized and found expression in an aesthetic that was filled with optimism, daring and a sense of possibility.

Peerutin Architects, who designed the architecture, worked closely with Silvio Rech, Lesley Carstens Architects and Interiors (SRLC), who are responsible for the interior architecture and design. “The result is a seamless continuation of the exterior expression to every detail of the interior,” says architect David Peerutin. 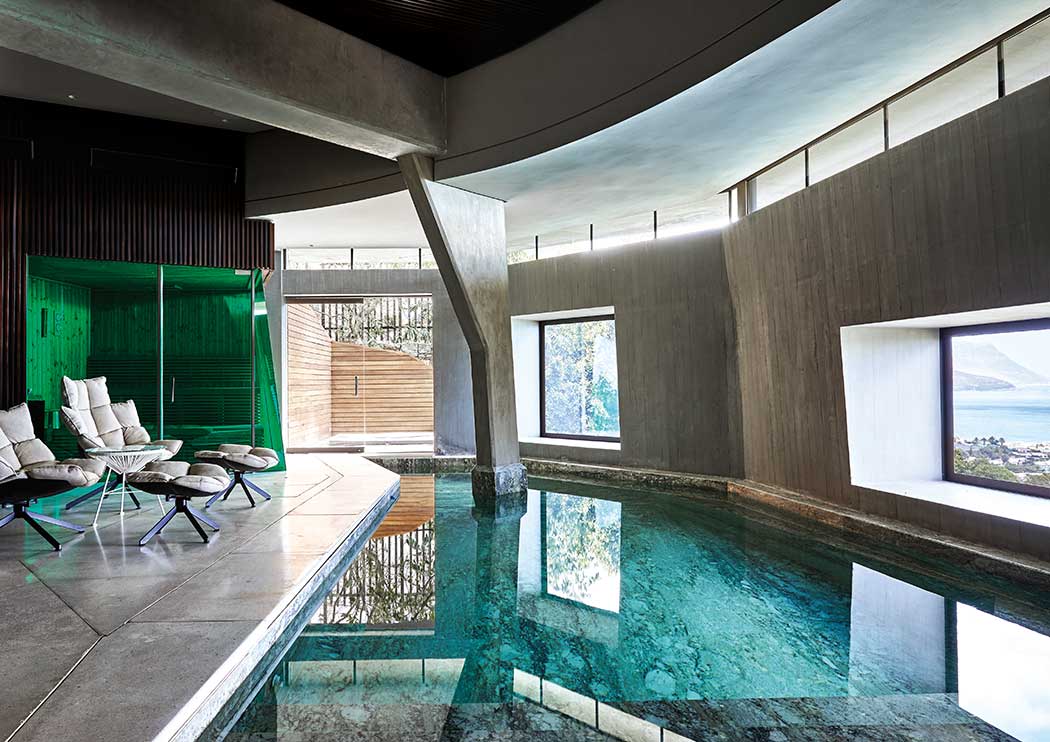 The house is split over four levels. The bottom two are clad in stone to mimic the mountainside. “As a direct and deliberate contrast to the solid base, the upper two levels, containing all the living, entertaining spaces and the bedrooms are designed as a light, sculptural group of ‘free-forms’ that weave indoors and outdoors together,” says David. Silvio describes them as “concrete ribbons, dancing, twirling in the wind”.

From the street you enter through the garage and from there, through a copper-clad sliding door and a lobby, there’s what Silvio calls a “Moneypenny-type” desk for a quick debriefing, completing an entrance experience fit for James Bond. A spiral staircase leads to the next level, with a bar, entertainment area, indoor swimming pool and guest bedrooms. Up one more level is the main living area with a lounge, dining room and kitchen. “The top level is made up of two sweeping flying saucers and a bridge that links them,” explains Silvio. Across “a green lawn in the sky” is a circular off-shutter concrete party pavilion with a swimming pool, spa and sunken bar.

Silvio and Lesley immediately understood that the experience of the house had to be elevating and uplifting. They wanted to immerse themselves not just in the architectural styling of the time, but also to understand the essence of “glamour in that era”, to enter the “mental space” of an era infatuated with UFOs and space travel as much as swimsuits and parties.

“A lot of the challenge was to keep the architecture pure, and to slide in long tracks of wood,” says Silvio. Everywhere, beautiful slatted timber panelling—much of it with acoustic treatment—lines the walls. It brings a luxurious warmth and velvety quietness to the interiors, contrasting beautifully with the rawness of the off-shutter concrete that peeps through.

They restricted the material palette to just a few materials: The raw concrete of the architectural shell and beautiful Palissandro Brasil wood panelling – even the indoor swimming pool is lined with marble and granite, making it seem like a glamorous stylized grotto. White terrazzo covers the floors. “Coming into this all were the little copper highlights,” Silvio adds, and black mirror to add to the sparkle.

Silvio and Lesley also designed an array of bespoke furnishings and finishings for the house, including bar counters, sofas, bed units, desks and dining tables. Much of the angular, prismatic detailing they created for the house looks as if it was inspired by stealth bombers as much as by “an early Lamborghini’s dashboard,” as Silvio puts it.

Some of the furniture sourced for the house is of the era—Platner tables and chairs with mustard upholstery, for example—while other items are iterations of the mid-century philosophy. Patricia Urquiola’s Husk Armchairs, Tom Dixon lights and even bespoke curved sofa by SRLC.

Throughout it all, the house has an organic connection to its setting: High-tech but grounded. The main living area was designed to look as if a patch of the beach below the house had “sprung up” and reconfigured itself as a plush living room. Its sunken floor is covered in a very, very soft pale grey carpet as if it were a luxurious patch of sand. Lush indoor planting pushes up in the stairwell and sheets of water, such as the pond at the entrance, with the copper-clad wall behind it, represent something elemental at the heart of the house. The granite indoor swimming pool feels at once like a strange laboratory and an underground cave.

The rich detailing is also conceived as a springboard to the kinds of parties that Aarons might have liked to photograph—a counter in the sunken bar in the pavilion cantilevers over the swimming pool, making it just a little too easy to progress from having a drink to dancing on the bar to leaping into the water. The bar in the main living area seems to cry out to be covered in Champagne glasses. It’s the kind of house where a poolside party becomes something of an artwork. In fact, Silvio loves to quote Lautner on the subject: “To me, architecture is an art, naturally, and it isn’t architecture unless it’s alive. Alive is what art is.”

It’s a quote that hints at what Silvio means by style when he says, “This era LA in the 60s and 70s had such a clear understanding of what style should be. [In those days] design was seen as a leading influence in lifestyle.”

This home’s homage to the bold and visionary design of the jet-set era does just that: It represents design as lifestyle—architecture as art—and has the power to  make anyone who crosses its threshold feel like film star. 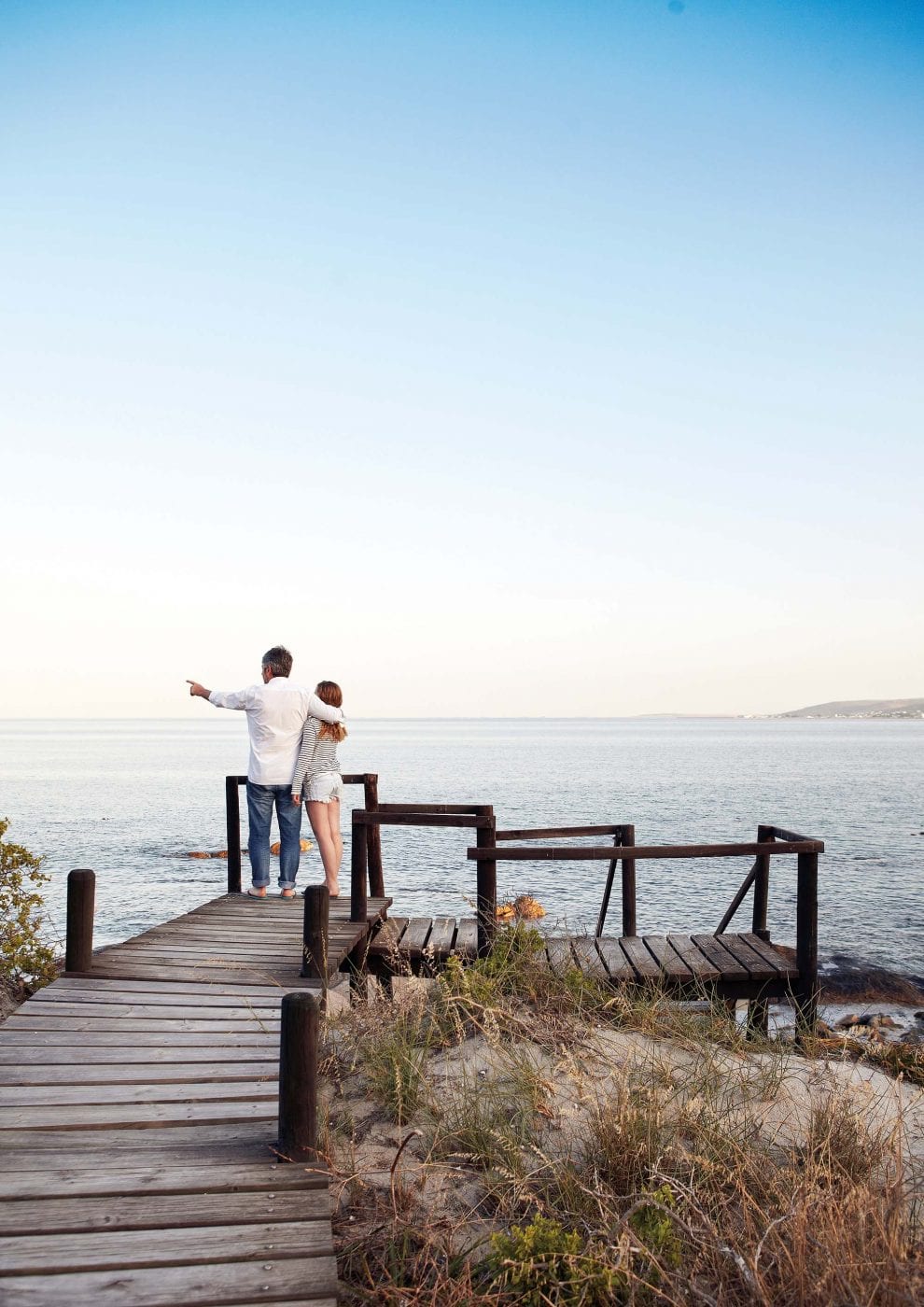 The meandering epicurist: Our man about town shares his latest findings

In tea shops in England, be very wary of whose clotted cream you’re eating. This is a serious business! A sense of place and space

On the sparkling waters of a limestone peninsula on the coast of Phuket’s Phang Nga Bay, a few restful days at COMO Point Yamu give us a chance to experience the lesser-known side of the island. Where the trade winds blow

To imply a siren as beautiful as Kapalua’s Plantation Course needed a facelift after 28 years might seem premature, until you consider the high standards required for perfection. 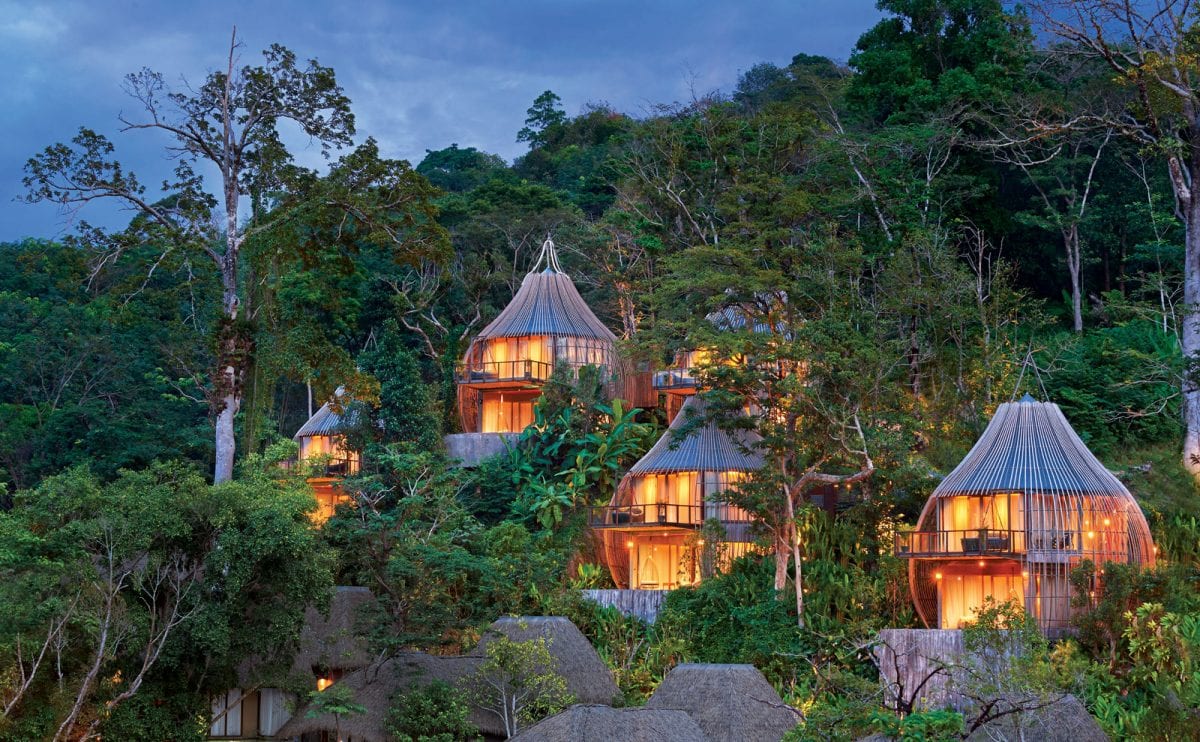 As the sun goes down and daylight begins to fade, the melodious call to evening prayers echoes across the valley. 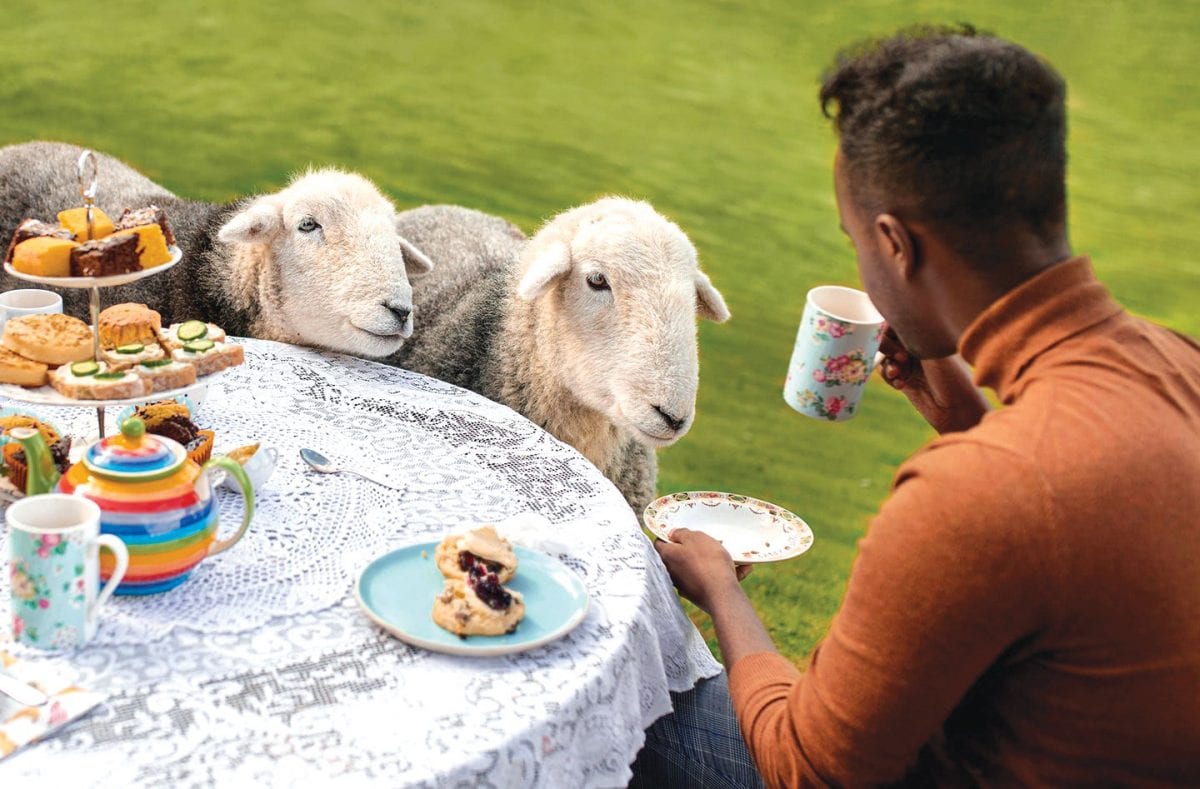